Yarram Park is one of Victoria’s largest working sheep and cattle stations and has remained in the hands of the Baillieu family since 1948.

Originally called “Yarram Yarram”, the property was pioneered from 1844 to 1852 by Robert Muirhead and Edward Parker. They held the title of 12,900 hectares until forced to relinquish it in 1860 by the government proclamation. 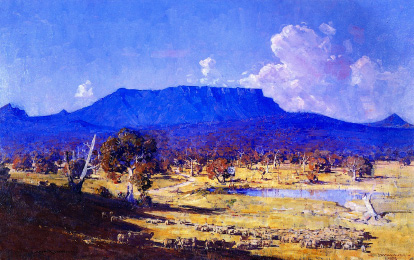 In 1864, the property was sold to the Robertson brothers, who built the still standing homestead. They sold it to Sir John Duncan in 1908, who renamed it Yarram Park, then sold the now 10,500 hectare property to F.E Cobbold in 1914. He on-sold it a year later to his nephews, the Cain brothers, who held it until 1948, when John Baillieu’s Western District Pastoral Company bought it.

At that time, the 9,700 hectares station was almost derelict – it’s few pioneering improvements in disrepair. There was no pasture improvement, a totally inadequate water supply and a serious rabbit problem. Under John Baillieu, the place increased its carrying capacity sixfold to 10 dry sheep equivalents to the hectare. At one stage, Yarram Park employed up to 30 staff members.

In January of 2006, Yarram Park was ravaged with fires coming out of the Grampians National Park. The property lost over 3,000 hectares and 134kms of fence line. There were minimal stock losses of some young weaner lambs.

Today Yarram Park is an intensive and diversified livestock operation, running  up to 30,000 sheep for prime lamb and wool production, including a stud composite breeding flock selling over 400 rams per year. The well-known Hereford herd also plays a major production role within the operation, including the Yarram Park Hereford Stud founded om 1947, and still going strongly today with the annual on property bull sale held in February of each year. The stud also exports Hereford semen throughout Europe, America, and Canada. Yarram Park operates as a modern diverse business, employing 7 full time staff, plus contractors through peak seasonal periods.

The original 121 year old homestead is now lived in by Antony and Sybil Baillieu, following on from Antony’s father and mother John and Elizabeth.

The homestead was originally constructed from hand made bricks sourced from material in the properties creek bed, and has since been rendered. The only other buildings on Yarram Park at that time were an overseer’s cottage, and the shearers quarters, all of which were also constructed from hand made bricks. The original woolshed was built in 1937 from timber logs, and was subsequently burnt down in 1939.

According to the story handed down by station hands and shearers, is that the famous Sir Arthur then 59, visited Yarram Park in 1926 as the request of owner Walter Cain. In letters to friends Streeton was not specific about his whereabouts, telling them, “I am away here painting among the sheep and the red gums, with the grand mass of the Grampians towering up behind”. He then mentioned the vital clue Walter Cain.

Sir Arthur inscribed the three versions of “Land of the golden Fleece” with the name of the local township Willaura – and not the property name. However, it is now clear that Streeton indeed painted the iconic work at Yarram Park.